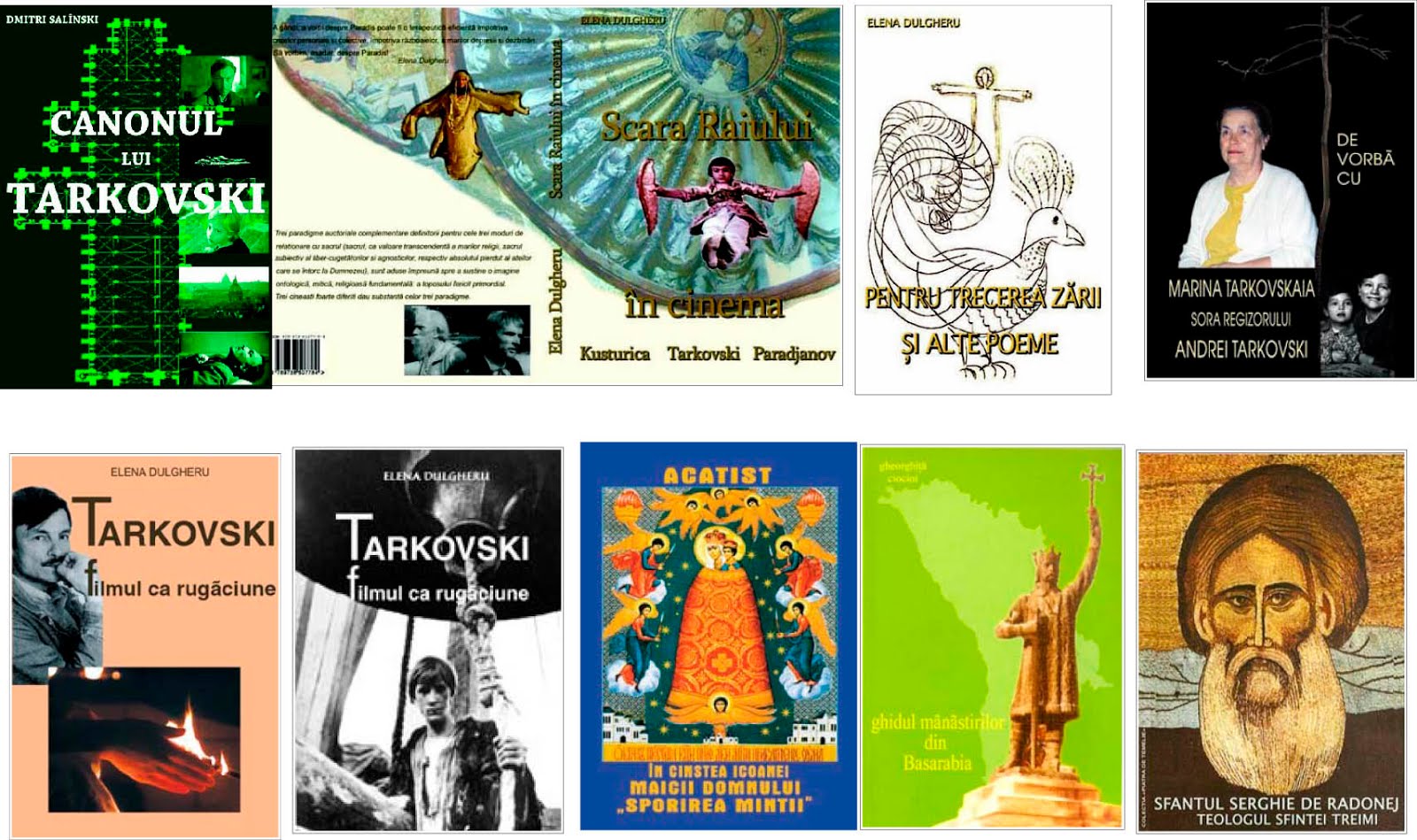 Tarkovsky. Film as a Prayer. A Poetics of the Sacred in Andrey Tarkovsky's Cinema 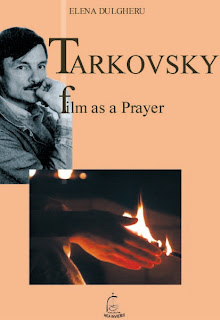 Translation from Romanian.
TABLE OF CONTENTS

FOREWORD
ANDREY TARKOVSKY AND THE TIME OF HIS LIFE
THE POETICS OF THE SACRED IN ANDREY TARKOVSKY’S CINEMA
0. ARGUMENT
1. SACRED IN ART
2. THE SACRED SPACE
2.1. Space in Art – Space in Cinema
2.2 The Virtual Space
2.3. Virtuality And Metaphysics
2.4. Cinematic Space: Between Virtuality And Metaphysics
2.5. Sacredness in Andrey Tarkovsky’s Cinema
2.6. The Archetype of the House
2.6.1. The Earthly House: Solaris
2.6.2. The Childhood House: Mirror
2.6.3. The House as an Object of Offer: The Sacrifice
2.6.4. The Borrowed House: Nostalgia
2.6.5. The Lack of the House: Ivan’s Childhood
2.6.6. Man Has No Place On Earth: Andrey Rubliow
2.6.7. The Tabor Dwelling: Stalker
2.7. The Archetype of the Edenic Garden

3.THE MOTIF OF TIME IN ANDREY TARKOVSKY’S MOVIES
3.1. Lucian Blaga’s Model of Temporal Horizons
3.2. Time-as-An-Artesian-Fountain: Ivan’s Childhood and Andrey Rubliow
3.3. Between Time-as-An-Artesian-Fountain and The Waterfall-Time: Solaris
3.4. The Reverted Time of Repentance: Stalker
3.5. The Time of the Memory: Mirror. The Motif of Duplicates
3.6. The Time of Expectation and The Time of Action: Nostalgia
3.7. The Eschatological Time: The Sacrifice
3.8. Notes upon Lucian Blaga’s Time Model

5. EPILOGUE (“Pray For Artists!”)
The Passions Upon Andrey
Andrey Tarkovsky’s Letter to The President of GOSKINO
Andrey Tarkovsky: Word of the Apocalypse
The Poems of the Father in The Movies of the Sun
Views of Spectators. Filmography. List of the Prizes

PRESENTATION OF THE BOOK
Quoted on: andreitarkovski.org/bibliografia.html
and on Nostalghia.com

Everyone accepts the presence of a metaphysical, spiritual, even religious and prophetic message of Tarkovskian films, but almost no one can explain how they work on the conscience of the spectators, their power of conviction, their mystery.
On the other hand, the "hunt for symbols", which became almost a common fashion in recent criticism and which can be encountered in some Tarkovskian studies, leaves the analyses at the middle of its way (the way from film aesthetics to spirituality).
The introductory chapter "Sacredness in Art" rises the question about the possibility of art to represent the sacredness, or in what degree and in what way has art the power to invoke immateriality, even the grace of the Holly Spirit? When the virtual space becomes metaphysical or even sacred? Both art and religious ritual use symbols (each one, in its specific ways) to signify the sacredness.
Approaching to cinema, which is, essentially, an art of image and movement, being described, therefore, by space and time, the book analyses the possibility of space and time to reflect spiritual world: can we speak about a "sacred space" and a "sacred time" in art, especially in cinema? These are the subjects of the next two chapters: "The Holly Space" and "The Motif of Time".
For finding out an answer, we have to open some chapters from the morphology of culture, that is the concept of space at Leo Frobenius and the concept of time at Lucian Blaga. These two thinkers of the XX-th century sustain that the dominant morphology of forms created by a culture brings to light the essence of its soul. Closed spaces, characteristic to Eastern (continental) cultures and best expressed by the Byzantine cathedral evidence the belief that spirit can find safe house in materiality. The opposite, the opened to infinite space, expressed by the Gothic cathedral and typical to the West-European culture reveals the tendency to transcend matter for conquering the spirit.
In Tarkovsky's scenographies the most recurrent object is the house: a traditional house, usually surrounded by a garden, a forest and a lake and which becomes the secret home, the shelter of the human soul. Tarkovskian house is an archetype (in Jungian sense). In all Tarkovskian films, the presence, loss or absence of the house express the state of the hero's soul and his deepest reasons of action. The archetype of the house must be related with emblematic moments from the peregrinations of the ancient Jews in order to find a place for the sanctuary, that is a home where human's soul and God would meet each other - such moments, hidden in our collective subconsciousness, are discretely evoked by Tarkovskian movies. All these considerations are widely argued and exemplified in the chapter "The Sacred Space".
Tarkovsky is considered an artist of the memory, a "sculptor in time". Although time takes shape in his hands, it isn't an ultimate value; time obeys to the filmic idea, giving it a visual expression. The three models of subjective time, the three temporal horizons enounced by Lucian Blaga (the fountain-time, the stream-time and the waterfall-time, refering, respectively, to the past, to the present and to the future) are present in the narrative structure of the films and reflect the heroes' conscience, their deepest expectations and their "strategy" of redemption. It is the third chapter, "The Motif of Time", in which the behaviour of these temporal horizons in Tarkovskian films is analysed, giving also an answer regarding the function of time, as a philosophical notion, for the human conscience.
The chapter "The Christic Motif" concludes: there isn't time or space that determine culture, therefore human conscience; even in art they are only a reflection of the spirit. Consequently, the deepest motif in Tarkovskian works is The Christ-like Motif. Reconciling matter and spirit, the Christian cross can be rediscovered in major art, joining the sensitivity of matter with human consciousness, enlightened by God.
Descending from aesthetic idea to the concreteness of the film frame, we notice that both natural elements (water, air, earth, fire), animals (the horse, the dog, the bird) and human beings (the woman, the child, the Christ-like hero) seem to be witnesses of a hierophany. Indeed, the matter has a pneumatophor vocation, it is able to remember the spirit: both the Fathers of the Church and modern physics are confirming that.
Therefore, the talent of a great artist consists in "catching" the touch of the holly grace upon the humility of the dust. It is interesting that, from all the abundance of the ancient symbolism of the four elements and of animals, leading us from heaven to hell and to the spaces of different mythologies, Tarkovsky instinctively selects those meanings that are useful to the spiritual dialectics of human conscience, on his way to redemption.
By the same meaning, the presence of humans, never pointing out their psychology, leads directly to their celestial archetype (respectively, the archetype of The Virgin, of The Divine Child and of The Saviour). Their similitude with the Orthodox icon can't be ignored and reveals the sacred dimension of the human being and our urgent need of interior restoration.
The book ends with some remarks about Tarkovsky's relation with Christianity and the prophetical dimension of his art. The vocation of major art, even nowadays is nearly similar to that of the Church and the religion, that is to remind people about their divine origin and to rejoin (re-ligio) humans with Divinity. A great artist is for the society almost what is a priest for the Church but, because of the chaotic character of postmodern culture, his capacity of spiritual orientation is hardly tempted. That's why the Epilogue's motto is: "Pray for the artists!". 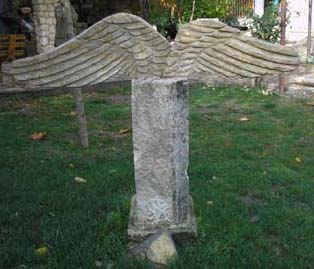